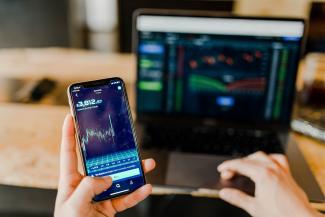 Many people think of a financial professional as someone who buys and sells stocks and bonds all day to make their clients' money. While this may still exist in certain companies, I can tell you it happens far less than even when I began my career in finance in 1999. As a CERTIFIED FINANCIAL PLANNER™ much of my job is to coach client behavior and to set expectations. Much of the predictions that are truly important have nothing to do with their stock and bond portfolios. For example, it is far more important to predict and plan for an age of desired retirement or what type of college their young children may go to, be it private or state institutions.

With that said, I originally got into this business because I was fascinated with the mythological stock market going back to the seventh grade in Mr. Orange's social study class. Mr. Orange, in a sense, had us play the stock market game with fictional money of course, instructing us to comb through the newspapers to pick two companies and track their price over the course of a few months. I keenly remember asking myself what business must be profitable and what business must grow. I figured that everyone uses electric so my first pick was Consolidated Edison (ED). At the time personal computers were being introduced into the home, so my second pick was Tandy Electronics. I didn't know it then but I executed part of a growth and income portfolio. A slow moving, high barrier-to-entry company, like Con Ed. A company that paid a handsome dividend and held somewhat of a regional monopoly. That was my value pick. That pick would have worked out just fine even to this day. My "growth" pick, Tandy, not so much. At the time there were only 3 personal computer makers. Tandy (which as I learned later was started as a leather company and eventually became Radioshack), IBM, and Apple computers. If I were any sort of financial prodigy, clearly I would have had my parents take a second mortgage, emptied out my Communion account, and bought Apple stock.

The purpose of this short story is that with one stock you had very little volatility in the movement of the company, Con Ed. And with Tandy, you had significant changes in business models and the way people purchased electronics and the company eventually went out of business. The volatility if owned throughout could have been gut-wrenching.

Volatility or sometimes defined as standard deviation is the measure of how far actual returns of a security vary from the mean average return. In other words, price movements. 2008 was by far one of most significant price movements in recent history. The S&P 500 was down in excess of 40%. Just in 2016, if you remember, the first two months of the year saw the S&P 500 down in excess of 4%, that's an annualized loss of 24%. But, the S&P 500 ended 2016 higher by better than 9.5%. You may not realize it but there is on average a 14% correction every year in the equity markets. We have seen a lower volatility stock market since the election of 2016. This is likely to change course at some point in the future. I can’t tell you when that will happen (I suspect no one can) but I can tell you that when it does, focus on your financial plan. Don't let the noise and hysteria of media outlets and news broadcasters scare you into deviating from the plan that you and your advisor have in place. And if you don't have such a plan, think about putting something together, on paper, that defines your goals, sets a time frame, and dollar amount. Otherwise you're destined to have a financial volatile experience.

As always consultations are free and I would be happy to speak to you about your current financial planning situation.